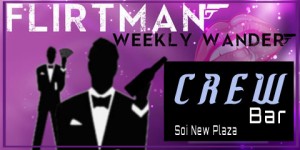 With the recently imposed curfew affecting Pattaya, The Flirtman boycotted the Gogo scene this week for his weekly wander and instead headed up to Soi New Plaza to check out a large bar named “Crew bar”.

This bar is located just 100 metres off Soi Buakhao and is probably the largest of the beer bars at this end of the street. If you’re looking for frills and neon then this isn’t the joint for you. It’s decidedly in the cheap charlie of fixtures as the bar mainly has plastic garden chairs surrounding a main stage perched against the wall and on the boundaries of the bar we have some makeshift high tables with bar stools. Quick note if you want any type of cooling from a fan then best to opt inside and get under 1 of only 4 in the bar.

OK so it’s not looking very inviting so far but the reason this bar is mobbed every evening (and i mean full to the brim) is the non-stop music from a few singers and the 60 baht san mig light. Of the 2 main chanters on the stage the lady is by far the best and can hold a tune but don’t expect all the correct notes in the right order from the male singer. Having said that, he is a happy chappie and certainly tries his best to keep doing what the crowd want which is mainly the full Elvis Presley catalogue as well as Tom Jones and Inglebert Humperdick. That’s right you’ll think you’ve died and gone to working men’s club paradise in some resort such as Benidorm or Magalluf. It’s obviously a big hit as you’ll be hard pushed to get a seat and there is a constant influx of have-a-go karaoke singers which keeps things entertaining. These range from the downright abominable to highly competent crooners.

There are a fair few women working in this joint although most are in the latter years of service. What this does mean is that most have good command of English and take care of the customers very well. The lady drinks are a bit pricey at 120baht but i’m guessing this is how they girls make the majority of their money as they tend to be service only and not chase bar fines.

To sum up Crew Bar would be to say that it has atmosphere and that certain party feeling as well as really cheap beer which will keep you plonked in that hard-to-get free chair all evening. Yes the singers could be better but somehow that’s it’s charm and the chances are you’ll have a wee chat to your drinking neighbours as it’s just that type of place. Oh and far from it for me to imply that these Thai owners have some connections in town as the party definitely didn’t stop at 10pm !!!

I’d call it the “Bamboo” bar equivalent of Soi Buakhao !

Flirtman loved this place as it’s a traditional spit n sawdust joint with no airs or graces 7 out of 10 rising to a 9 when you’re blind drunk.

*NOTE* a poster in bar is saying they have some sexy dancer shows and big party on 6th june…i’m guessing this will be stupidly busy so get there early. (buy 3 chang get 1 free)  (145baht total)