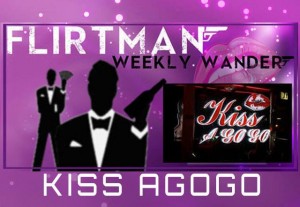 After the last 2 weekly wander disappointments the Flirtman headed out knowing the only way was up and selected a small relatively unknown gogo named Kiss located at the beginning of LK metro.

2 friendly greeters smiled outside as they led me through a dark curtain to reveal that i had in fact magically been teleported to the old Beach club soi 15…now i know where the old fittings went when they renovated recently. This joint certainly is a strange layout shape with several mirror tables running alongside the main wall and 2 smaller stages & bar running along the other wall.

It reminded Flirtman of Bangkok……another joint with no real “centre”

4 mediocre girls shuffled on the mirror tables that were so worn and scuffed that any resemblance to a mirror was well gone several years ago. Another 2 girls slept on the bench seats in the corner adding that cosy, lived in feel.

As i gathered thoughts Flirtman realised he was alone and tumbleweed swept along the floor towards the similarly lonely TV. This was not fairing well.

A small draft beer appeared served by a slightly more friendly waitress who swiftly sat down beside me and continued to check Facebook, twitter, line, whats app and Tango …and probably Badoo ! Standard pop music poured out of the speakers and the rotating dancing ladies did try their best to catch my eye but it was all too little too late.

All in all a huge disappointment and it begs the question as to how these joints can survive in the competitive area such as LK Metro.

The score on the door for Kiss agogo is a 6 out of 10 simply because i’m a fan of spit-n-sawdust joints and i have a spider sense that this place could be fun if caught at the right time and with the right girls (who may or may not have been bar fined on this evening).