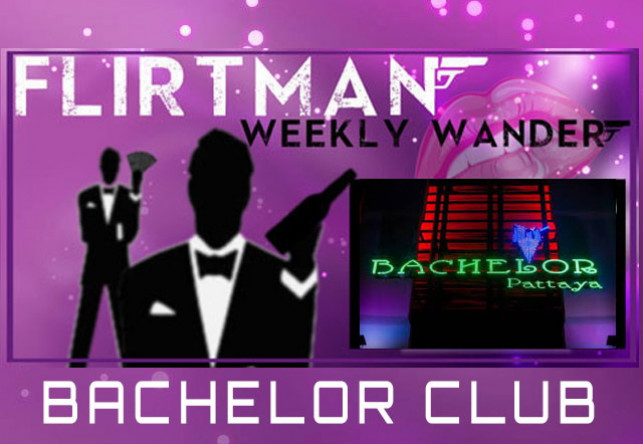 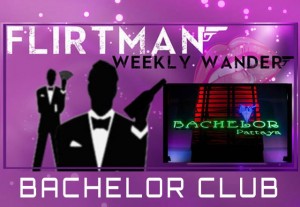 Well this week has seen Pattaya brave the elements and a canoe would be a better mode of transport than the regular motorbike. This has equated to a rather quiet time for the city and it has reflected in the sheer numbers of punters coming into the gogos. To say LK Metro was quiet would be a gross understatement but a weekly wandering the Flirtman must do..even through the rain.
Now being a self-proclaimed born-again bachelor (and virgin) it seemed only suitable that i checked out the Bachelor Club on LK Metro.
This place has been opened since july last year and had always escaped the wandering list for some reason but tonight was the time to rectify all that.
The first thing you notice when you enter is the swanky interior. It is super plush with velvet curtains adorning the walls and matching angled built in sofas throughout. They have built the whole unit in a figure of eight shape to add that bit of glamour and get more a gentleman’s club feel rather than a bog standard gogo layout. The plush setup is in stark contrast to the strange spacey lights and glitterballs as well as a main light column that looks like the centre of the DR Who Tardis. So if you’re looking for a cosy atmosphere then this place is a good choice.
In the centre stage you’ll find around 8 girls dancing but due to the strange shaped podium they have some problems moving around from one end to the next. If you are unlucky enough to not grab a sofa and you’re stuck up front and centre on little chairs then watch your beer as the girls squeeze by.
The girls themselves were all kitted out in a skirted black swimsuit affair and were slim and nimble. Some lookers are here and are above par in relation to the rest of LK gogos. There may be a tier system running in here with, higher up the range, showgirls wearing a strange futuristic chain link swim suit and then some with just nothing on. All great eye candy !
Having a gaze around the place i noted that nearly every monger on the sofas had a companion from the bar and this would lend itself to it being a slightly harder-sell joint as to opposed to the dance-and-leave places like Champagne etc. Some of the shyer patrons may like this style but Flirtman prefers to do the choosing and browse for a while. Having said that the girls weren’t overly pushy and seemed to get the message quickly so no real drama or bad manners etc.
As per normal LK rules they do draft beer at 65 baht but it did seem a tad warm-ish rather than cool & refreshing. Maybe the barrel had just been delivered but one to look out for in the future. As stated above, this place aint gonna pay the rent from 65bt drafts so hence the lady-drink-push being critical to boost profits. I know a few high-roller friends that frequent this place regularly and aren’t shy with the LD’s or the bell and their bill can run into silly money so just beware.
There really isn’t much more to chat above Bachelor other than to say it’s comfortable and has some of the best girls in the street but whether it can deliver the fun-factor of Heavens above or the music remixes that Crystal delivers remains to be seen.

7 out of 10 for Bachelor Club
Remember the flirt man is saying it like it is (without payment) and visits totally anonymously.