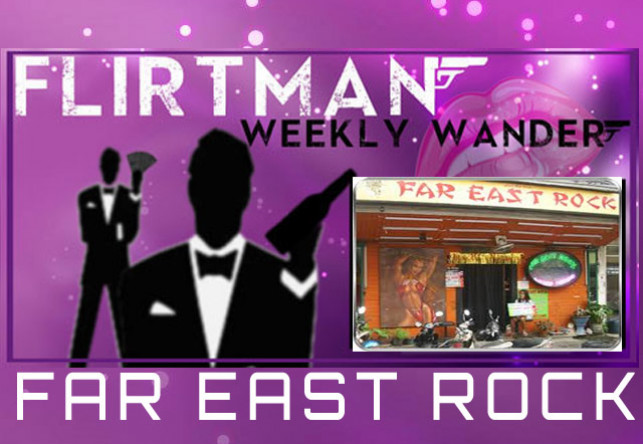 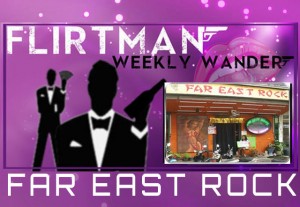 Last week Flirtman checked out one of the daytime gogos down soi 13/2 (aka soi post office) named club Nevada, so it just felt fitting in the name of fairness that i now popped directly across the road to see what their competitor , Far East Rock, had to offer.

Walking inside one could be led to believe that it may be the same owner of club nevada, such is the similarity of the interior and the ambience and fixtures. It’s a decidely dark wooden rock n roll bar and does have that old feel.

The layout is slightly larger than Nevada and has a longer central stage which has around 6 ladies doing the isaan shuffle. There is bench seating on both sides but has a larger square bar area with high stools and tables at the rear. There also seemed to be more ladies working in here than their neighbouring joint…..some who were lookers mixed in with a few older ladies. This isnt a criticism as some of the older gyraters can sometimes be more fun with the customers and dont suffer that “superstar” attitude that the miss thailand world agency mob have.

One thing that sets far east rock apart from Club Nevada is that here the music is more varied rather than just being hard rock n roll. You’ll get a mix of 1970′s, 80′s etc and they put their video screens to good use by showing music videos from by-gone days.

The beer prices are almost identical with draft beer Chang coming in at 55baht and Heineken setting you back a mere 65baht. It should also be noted that the service staff in here (and the ladies) were really friendly and stayed around for a chat without being pushy and asking for drinks etc. It seemed they were just happy for the chat and seemed a good hearted bunch.

The overall point that flirtman needs to get across in this review is that Far East Rock is the sort of place that you can walk in alone and actually feel relaxed and welcomed. You’ll find a warm welcome from the girls at the door and once seated it starts to feel like you’ve arrived home…they’ll be no onus on you to watch were you look or watch what you do…there wont be 50 eyes upon you to make you feel uncomfortable…..you can merely sit back relax and enjoy a nice cold beer in the aircon bar whilst outside is a blistering hot day. Far East Rock is a 1pm start and goes on till 11pm but im guessing tumbleweed will blow in around 8ish.

Flirtman gives the Far East Rock a great 9 out of 10 simply because if more gogos were like this Pattaya would be a much happier and fun place.