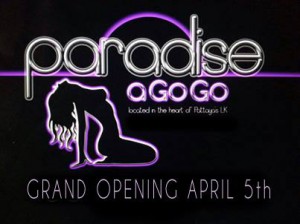 GRAND OPENING PARADISE AGOGO Saturday 5th April was the date for the new and improved Paradise Agogo (LK Metro) grand re-opening party and Flirt Pattaya were there to suck up the atmosphere and have a look at the new fixtures and fittings. To say this joint has had a transformation would be a huge understatement as it’s obviously been gutted from top to bottom. Nothing now remains of the PARADISE of days gone by…..except the beer prices. That’s right, despite spending a small fortune on the interior , the management have retained their all-night 65 baht draft as well as their regular returning ladies (which had temp moved to Oscars during re-fit). On The opening night the place was expectedly full to the rafters and even Flirt struggled to get a seat. The gogo area itself has been extended and the previous “back room” area has gone and made more space for a bigger and better seating/podium area. The side bar has also relocated to the rear which means more comfy seating for the punters. There seems to be a theme of pink neon going on and was pleasing on the eye. It may have been Flirt’s imagination but we were sure the number of Damsels in distress seem to be up. They had some lovely tight black leather shorts team replaced by a slightly chubby “blue bikini” team as well as several other rotation teams. Something for everyone there. For those that follow our “Weekly Wander” column you’ll know that The old Paradise setup was one of Flirtman’s favourite hangouts which combined a slight sleaze atmosphere with good bar prices and hassle free entertainment. If Paradise can keep to the same formula then we believe the management team may just have a real winner on their hands Flirt Pattaya wishes all the team at Paradise all the best success in the future and hope to have a video review in the very near future.