12
May
The Flirtman Weekly Wander – The Beach Club 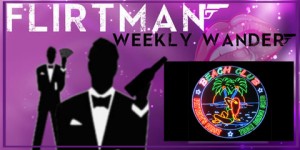 The FlirtMan was chuffed that he had found a gem 10 out of 10 wandering joint last week so this week it was gonna be a hard act to follow but the show goes on and wandering we must go.

This week’s wander did turn out to be a truly unplanned event as Flirtman nearly walked past Beach Club agogo (soi 15 off walking st). A last minute brain flash had me realising that it had been some years since i had experienced their mirror floor voyeur establishment so with a hop and a skip i entered once more to this small chrome palace.

The first thing i had been unaware of was the renovation that had taken place. It was a completely different place to what i had remembered. Gone were the multi mirror tables and high uncomfortable seats and the place looked huge in comparison.

The layout is now one of a figure of eight style dance floor which accommodates up to 11 damsels at a time. The mirrors have moved onto the ceiling and the whole thing is surrounded by 2 tier bench seating with bar stools set against the dance floor itself. The owners have went for that “red” look and to be fair it kinda looks exactly like a slightly smaller peppermint agogo now. It’s the same owners so i guess that should be no surprise. Another point about the decor of note is that there are absolutely no Tv’s inside so don’t expect music videos or football updates. They now have aDJ box situated at the back and although it was decidedly what Flirtman would call “car alarm” style (verging on the brink of lunacy 200 bpm) it did seem to go down well with the dancing ladies.

Did i mention dancing ladies ? Well yes to not mention these would be a sin itself as there were hoards of them (i hope that is the plural term) Seriously, Flirtman not only looked at 11 stunners gyrating with vigour onstage but a quick scan around it was just wall to wall. Now this may be a symptom of low season but it was truly mind boggling just to see so many lovelies in one area and so many little eyes slightly staring but not staring…in the way only a gogo lady can. The rule of thumb in here must be the 30sec stare rule. i.e if you look for more than 30 seconds then that is an invitation for them to move over, otherwise you are not bothered in any way. All the girls were up there with 9 out of 10 in the looks department. On this evening there seemed to be a rotor of 3 groups. Group 1 had the denim short mob followed by the orange bikini mob. To suggest that half the bikini became missing would be irresponsible of Flirtman as we know the BIB may be reading. In between these groups were the showgirls wearing beaded skirts and spinning upside down on the poles. Landing strips galore! Very entertaining. (on this evening we also had a strange falang next to us doing magic tricks for the staff but i would hazard a guess he wont be a regular event).

As per standard “happy” group bar prices, we had the 69baht small draft and normal bottles come in at 140.

I guess to sum up The Beach Club would be to say, it’s actually much better than peppermint and if it’s eye candy you’re looking for then you need go no further and the shows keep you entertained. i’d give it a 9 out of 10 simply because the draft beer is a bit on the small side and hopefully the DJ was on a bad night.