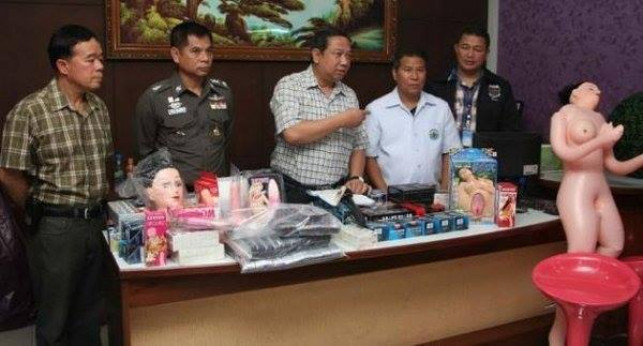 07
Oct
Why are sex toys illegal in Thailand? 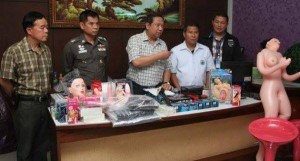 It will come as a surprise to the casual holiday maker that sex toys are in fact illegal in Thailand. It may also come as a surprise that paying ladies for sex is illegal too. But, you might ask, what about all the street stores on the man Sukhumvit Road in Bangkok that sell sex toys and other marital aids including all forms of pills and potions to improve male potency, plus what about all the A Go-Go bars, female nudity and sex shows in Bangkok and Pattaya? Yep, they are all illegal in Thailand. So by now you may be scratching your head thinking this is all awfully confusing. It’s easier to understand if you try to imagine certain areas of Bangkok, Pattaya and Phuket as frontier Gold Rush towns mixed with Victorian England’s pious holier than though façade hiding a thriving promiscuous city culture thriving on all levels of prostitution!

Sometimes the guys selling the sex toys get busted followed a public parade of shamed faces and finger pointing authorities that appear on TV and in the newspapers. A few days later….The sellers are back on the street…. Similar themed raids occur with the A Go-Go Bars too, often staff, and more recently guests, get drug tested. These raids are also designed to eradicate underage drinking and illegal workers too. Again, a few weeks later and often following some hefty fines, the bar re-opens.

It seems there is a tolerance of illegal activities relating to the sex industry in Thailand, but it is an uneasy tolerance when pushed too far that will invoke criminal action by the authorities. Everyone understands that it’s a massive money making business, but it does not sit well with the more traditional Thai way of living. Try selling sex toys on the Soi’s in Chiang Mai and you will be cleaned off the streets the same day. In the towns and cities of Thailand that have a thriving tourist and sex tourist scene is where the selling of such items happens, but never forget it is illegal. The real reason why these toys are illegal is cultural. Thai culture is very polite and courteous, after all it’s called the land of smiles for a reason.